7 Freeways to Demolish - The Infrastructuralist 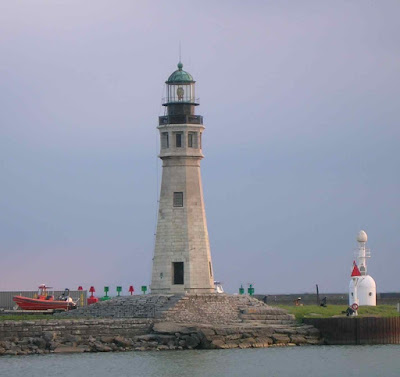 The Infrastructurist just published a column on seven freeways to demolish.

One of the freeways is Buffalo's Skyway. As a native of Buffalo I agree with Michael, who commented on the great views from the Skyway.

But ... why stop at tearing down the Skyway in Buffalo? Interstate 190 goes north from the Skyway cutting the city off from LaSalle Park and continues along the banks of the Niagara River ... what could be a magnificent riverfront. The lighthouse above is on the shore of Lake Erie at the Coast Guard station.


View Buffalo Freeways to Demolish in a larger map

Next up, Buffalo's Inner Beltway. Let's start with the Scajaquada Expressway (NY 198), running along Scajaquada Creek through the Fredrick Law Olmsted Delaware Park (!!!). Then the depressed freeway in the Olmsted-designed Humboldt Parkway (I guess it was OK to put a freeway through the parkway in the African American neighborhood but not the one in the mansion district: Chapin Parkway).

Yeah, yeah, "What will happen to the traffic?" "Buffalo needs the freeways for economic development."

Figuring out how to deal with the traffic would take some creative transportation planning, but maybe what Buffalo really needs is some bold thinking for the future.

"I guess it was OK to put a freeway through the parkway in the African American neighborhood but not the one in the mansion district" --- Sir, do I detect some extremely obvious racist overtones?!

Peter - actually it was meant to be sarcastic ... in other words I think it was a crime to put a freeway through the African American neighborhood. It happened all over America, urban freeways were built running through the neighborhoods where the poor and disadvantaged classes lived. Demolishing the freeway would begin to heal the wounds, but do nothing for the people who have suffered through 30 or 40 years of freeway traffic. Sorry to have been unclear in my original posting.

Why not instead cover the depressed freeway?

Yes! Someone with vision!

Instead of demolishing them why not make them into light rail corridors... the ground is already level and slapping tracks onto the asphalt would be cheaper than having to carve out new paths. Also if the light rail system follows the old highway system it would provide a quick and easy transition to people used to using the highways. Not to mention most highways already connect to major traffic making parts of cities so that the rail system would cover most of the city, and why not also leave a lane or two for buses to quickly get from one part of the city to another.